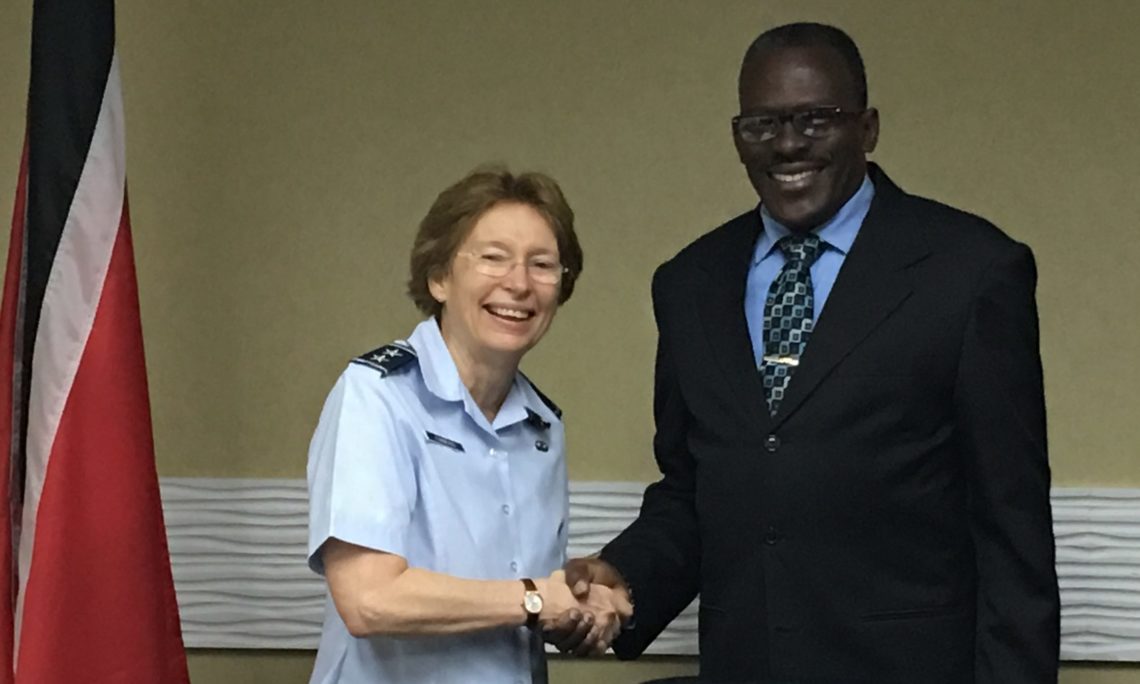 Major General Carol Timmons, new Adjutant General of the Delaware National Guard (DNG) has given a personal commitment to continued strong relations with the Trinidad and Tobago Defence Force (TTDF).  She made the declaration during a visit to Trinidad earlier this week.

After meetings with Minister of National Security Major General (Ret’d) Edmund Dillion and Chief of Defence Staff Brigadier Rodney Smart and other senior leaders at the TTDF, Major General Timmons said visiting Trinidad was one of the things at the top of her to do list in her new role.  She visited twice before as Assistant Adjutant General for Air.

“I thought it important to visit because I wanted Trinidad and Tobago, the Minister and the Brigadier to understand that this partnership will continue.  We greatly value our relationship and we look forward to advancing and maturing the nature of our engagements”.

“This is my initial senior leadership engagement.  We will look at issues that are of mutual interest between the TTDF and the DNG. Over the past decade we have learned a lot from each other and plan to continue that partnership in the future by drawing on our individual experience and expertise and sharing that information.”

The DNG and the TTDF has enjoyed a twelve year partnership under the Guard’s State Partnership Program.  The program provides opportunities for joint training and subject matter expert exchanges (SMEEs) on a variety of topics.  They span critical capabilities from flight safety, engineering, and counter drug operations to personnel issues such as professional development, family support, and force support programs.

Asked about being a woman leading the DNG, she said: “It is a big deal because it’s another barrier getting knocked down.  It’s good to recognize it and not because you are patting Carol Timmons on the back, but it shows there is opportunity for other women and men and anybody can rise to this level in the DNG.”

She said women in the military represent a demonstrated proof that diversity in gender and race improve overall effectiveness, emphasizing that good qualifications are also critical to sustaining organizational effectiveness.

Major General Timmons recently celebrated her fortieth year in the military having joined after High School.  Initially enlisting in the Air National Guard, she said she wanted to fly but back then women weren’t allowed. She flew helicopters in the Army National Guard for four years, later deployed in Desert Shield/Desert Storm flying large cargo jets, and ultimately returned to the Air National Guard, where she ascended through the ranks as both pilot and leader, to become the top military officer in the State.