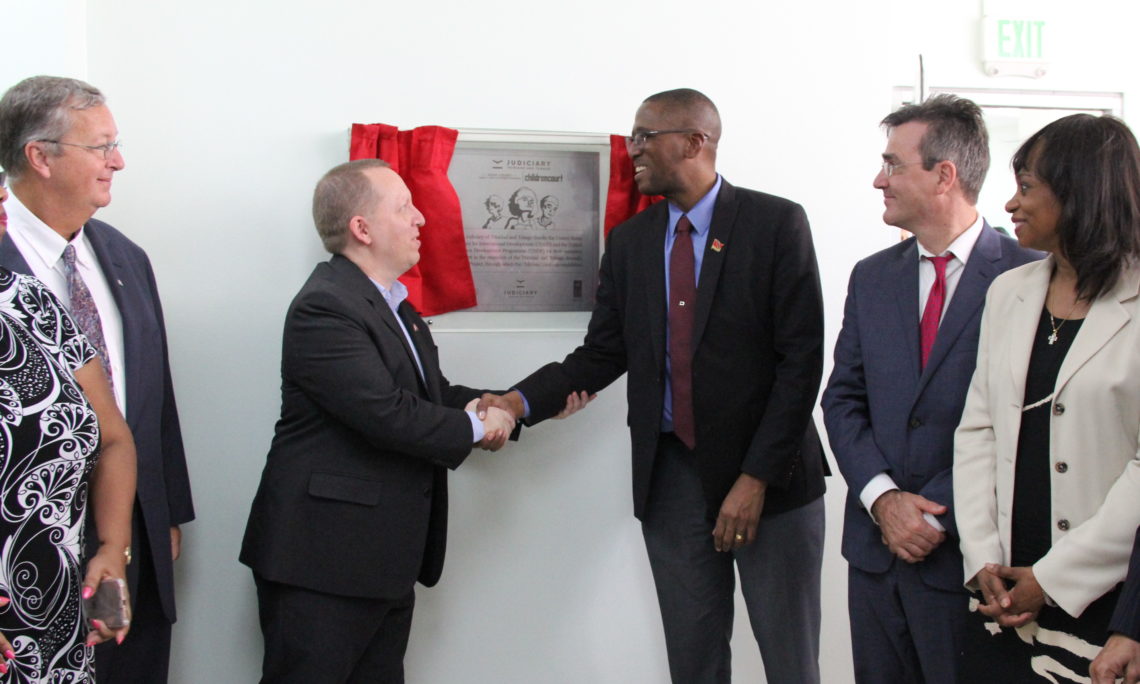 Port of Spain, Trinidad – On March 6 and 7 2018, the Judiciary of Trinidad and Tobago held two launch ceremonies to mark the openings of the North and South locations of their new Children Courts at 6 Elizabeth Street, St. Clair, Port of Spain, and Corner Dehli Street and Fyzabad Main Road, Fyzabad. The Courts were established through the Trinidad and Tobago Juvenile Court Project (JCP), a joint initiative of the United States Agency for International Development (USAID), the United Nations Development Program (UNDP) and the Judiciary with technical support provided by the U.S.-based National Center for State Courts. Launched in 2014, the JCP sought to establish the supporting mechanisms needed to adopt a rehabilitative approach to treating with children in conflict with the law. The Children Court is a subdivision of the new Family and Children Division of the High Court created to deal with all family and children court matters.

The first of its kind within the CARICOM region, this rehabilitative Children Court deals with all children matters including children (under 18) who are charged with offences, children in need of supervision and child care and protection matters. The Court which began operations within the past week heard its first matter on February 28, 2018. While the Court is committed to ensuring fair, humane and efficient justice for all, its primary dual focus is to encourage positive behavior change and accountability on the part of young offenders and children who appear in court because of consistent negative behavior.

Opening of the Children’s Court- Port of Spain

Honorable Ministers of the Government

Members of the Diplomatic Corps

Members of the Media

I am pleased to be here today representing the United States Government on this landmark occasion that marks the official opening of the new Children’s Court in Port of Spain.

Today’s event is a celebration of the successful partnership between the United States Government, the Government of Trinidad and Tobago, the Judiciary, the United Nations Development Program and juvenile justice stakeholders, among others. All these partners have collaborated to deliver a reformed justice system that relies on new practices and will achieve measureable improvements in delivering justice well into the future. Through our collective efforts, we are supporting a new paradigm relative to the treatment of children who come into contact with the justice system.

The U.S. Government’s support for this work began in 2014 under the leadership of the Chief Justice, the Honorable Ivor Archie, and other stakeholders that presented a clear vision of reforms necessary to improve Trinidad and Tobago’s approach to child justice. I am happy that through USAID, the U.S. Government was positioned to collaborate with local visionaries and provide support through the Juvenile Court Project or JCP.

Today, we celebrate an important milestone in that work – the installation of vital systems and infrastructure that facilitate a new approach to justice. The JCP was designed based on strong evidence demonstrating that an emphasis on rehabilitation reduces the possibility of youth reoffending or becoming criminalized or radicalized, and envisioned as a project that would ultimately create long-term change in the lives of Trinidadian youth and society.

The JCP has allowed for the revision of laws that direct a rehabilitative approach to child justice and supported the inclusion of peer resolution. The investment in the infrastructure of new courts to address the unique needs of children and families speaks to the child-centered approach of the JCP. As a result of lessons learned from the JCP, better data driven and problem-solving justice systems will continue to be designed in the Caribbean throughout the years to come.

Further, justice stakeholders are now transforming how institutions function by supporting data-centered approaches, improving coordination among agencies in delivering services to children and families, and providing court-integrated social and rehabilitation services. These exciting developments are assisting in diverting children away from the courts or incarceration and showing how a more responsive approach to justice will benefit children, families, and society well into the future.

The JCP is one example of how the U.S. Government, through the Caribbean Basin Security Initiative or CBSI, partners with regional governments to reduce youth crime and violence levels in the region by improving social justice and promoting prevention-focused solutions.

In Port of Spain, the new Children’s Court will serve constituents in the north of the country, and tomorrow the Fyzabad court will be opened to service residents in the south. I’d like to take this opportunity to thank the Government of Trinidad and Tobago and the Judiciary for its leadership support towards the establishment of the new Children’s Courts and for pledging the resources necessary for their long-term maintenance. This is a clear demonstration of the sustainability of the JCP and the Government’s long-term commitment to child justice reform.

In closing, I want to congratulate all stakeholders involved for your dedication in bringing this important work to fruition. I look forward to hearing about future achievements that build on today’s successes and support this island’s most valuable asset – its youth. I wish you the very best in all of your future endeavors.