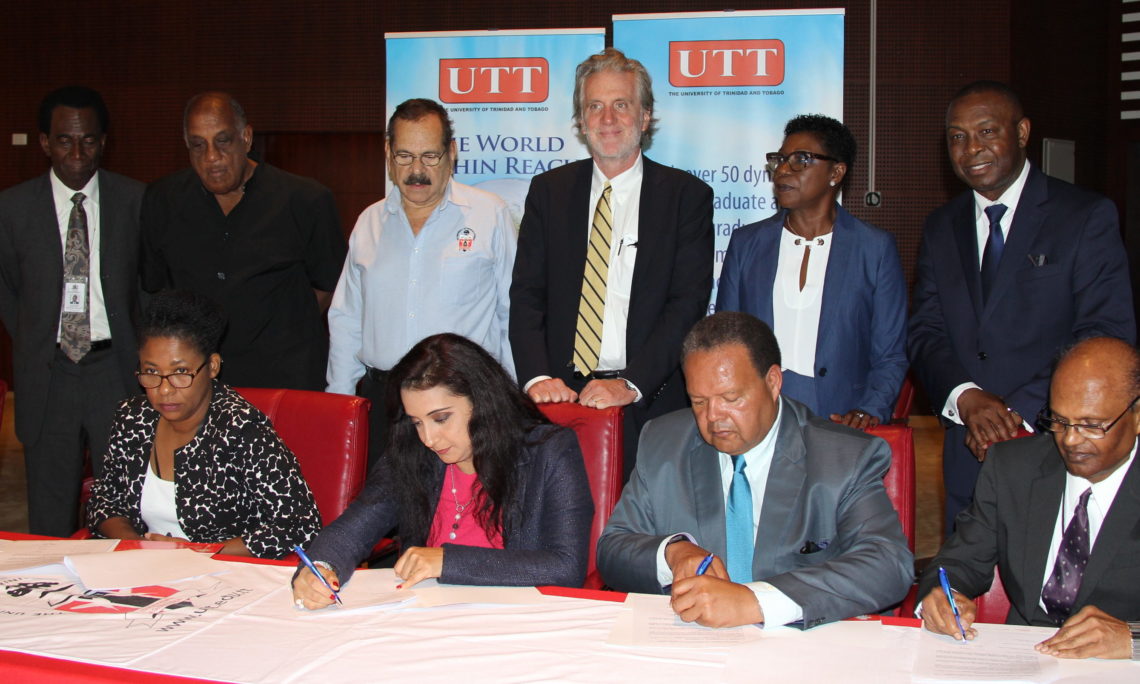 Representatives from US and Caribbean educations institutions sign the Consortium agreement

On May 10 in Port of Spain, U.S. and local educational leaders established the USA-Caribbean International Education Consortium (UCIEC) with the signing of an agreement between The University of Trinidad and Tobago, New York’s Medgar Evers College, and seven Caribbean institutions.  The agreement aims is to promote academic collaboration toward solving the developmental challenges of the countries and regions of participating member institutions.

At the signing ceremony, Public Affairs Officer Stephen Weeks underscored the U.S. Government’s support of educational opportunities between the U.S. and the Caribbean under the United States-Caribbean Strategic Engagement Act of 2016.

Several other speakers acknowledged the Embassy’s support in developing Trinidad and Tobago’s education sector through programs like the Fulbright Specialist Program and the International Visitors Leadership Program (IVLP) among other initiatives.

Chairman of the Consortium is President of Medgar Evers Dr. Rudolph Crew, who will serve as the Consortium’s first chairman.   Dr. Crew, the former New York City Schools Chancellor, first visited Trinidad as an Embassy-supported speaker in 2015.  The Caribbean institutions signing the agreement are University of the West Indies, University of Guyana, EGC Martinique, University of St. Martin, St. Vincent and the Grenadines Community College, Antigua State College and Anguilla Community College.  Other U.S. and Caribbean institutions are expected to sign on to the agreement.

Prime Minister Dr. Keith Rowley discussed the possibility of the Consortium  during his visit to Medgar Evers last year, when he delivered the commencement address.