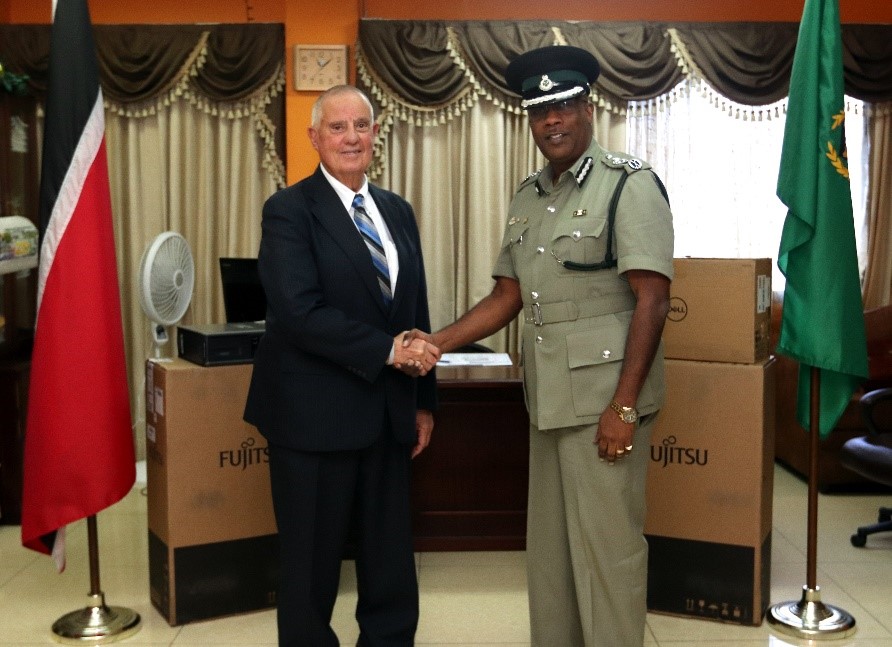 Port of Spain, August 16, 2019:  The U.S. Embassy is pleased to play a role in enhancing the ability of the Prison Service not only to respond to emergencies, but also to track the criminal networks that attempt to continue their activities from behind prison walls.

Today, Ambassador Joseph N. Mondello handed over a U.S. donation of  counterfeit currency detection machines, riot gear kits, and computer hardware to the Trinidad and Tobago Prison Service to aid its efforts to provide a safe, secure, and humane correctional environment. The handover to Prisons Commissioner Gerard Wilson took place at the Trinidad and Tobago Prison Service’s Administrative Offices in Port of Spain. The counterfeit currency detection machines will be used to check the legitimacy of currency and checks presented by criminal defendants or their representatives seeking bail as part of the Bail Reform Act of 2017.

The riot gear kits were provided to the Prison Service Emergency Response Unit, whose officers also recently attended a U.S. Department of State-sponsored “Mock Prison Riot” training exercise in West Virginia. The computer hardware will host software that will allow the Prison Service to better identify and track the criminal networks active in the prisons.The donation was made through the Caribbean Basin Security Initiative, utilizing funding from the U.S. Department of State’s Bureau of International Narcotics and Law Enforcement Affairs.

Ambassador Mondello noted that the United States is pleased to continue our long-standing support to the Trinidad and Tobago Prison Service as it continues to modernize its operations to protect society and facilitate the opportunities for rehabilitation, while maintaining control under safe, secure and humane conditions.