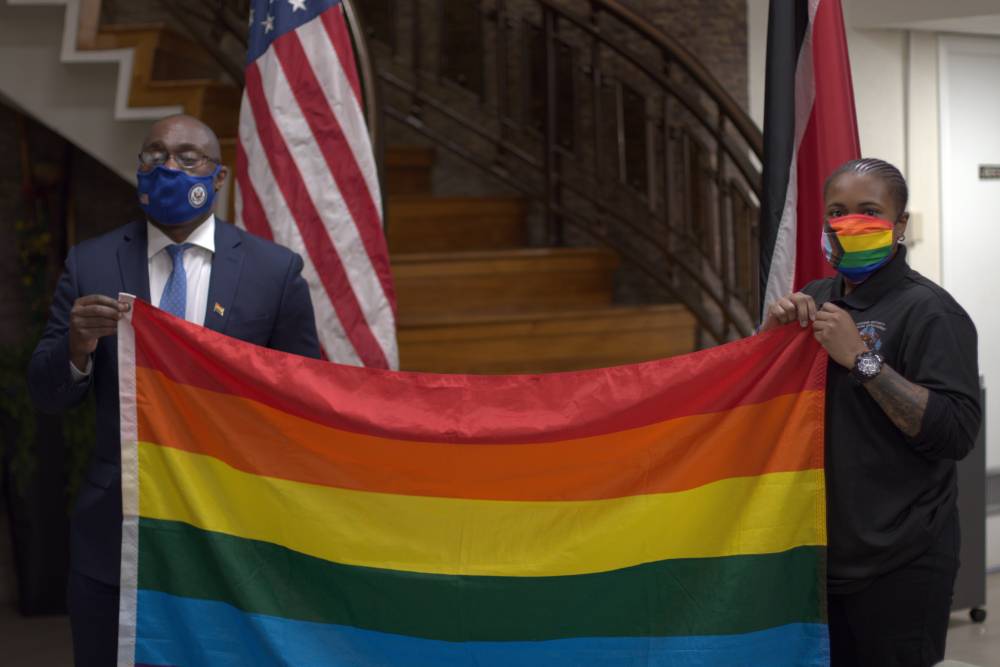 June 26, 2021: Today the U.S. Embassy Port of Spain raised the rainbow Pride flag at its Queen’s Park West compound to mark the start of Pride Month in Trinidad and Tobago, and the celebration of June as LGBTQI+ Pride Month in the United States.  The flag will be flown all day.

June 26 also marks an important turning point in the fight for LGBTQI+ rights in the United States: it is the anniversary of the historic Obergefell v. Hodges Supreme Court decision in 2015, which ruled that the fundamental right to marry is guaranteed to same-sex couples and is the law of the land.

Chargé d’Affaires Shante Moore said of the historic event, “In June, Americans celebrate LGBTQI+ Pride Month by showcasing outstanding examples of diverse, inclusive communities.  Today is an historic day.  This is the first time we are flying the Pride flag over the U.S. Embassy in Port of Spain.  We chose this date, June 26, as it coincides both with a significant Supreme Court landmark decision in civil rights, and is official Flag-Raising Day to mark the first weekend of Trinidad and Tobago’s Pride Month, which runs through July 25.

“Pride movements across the globe have made tremendous progress over the past 30 years.  We confirm the benefits of recognizing individuals’ LGBTQI+ status as an inherent aspect of one’s identity.  Diversity is strength, and the U.S. Embassy is proud to fly the Pride flag today as a powerful symbol in support of LGBTQI+ human rights, which affirm the freedoms and aspirations of diverse communities everywhere.”

The Biden-Harris Administration has encouraged all embassies and consulates to fly the Pride flag on the same flagpole as the U.S. flag to demonstrate the United States’ leadership on LGBTQI+ human rights around the world.  In his proclamation of June as LGBTQI+ Pride Month, President Biden recognized the resilience and determination of the many individuals who are fighting to live freely and authentically.  This Pride Month, we recognize the valuable contributions of LGBTQI+ individuals across the United States and the world, and we reaffirm our commitment to standing in solidarity with the LGBTQI+ community in their ongoing struggle against discrimination and injustice.