Home Home | News & Events | U.S. among those recognized for role in rescue of Thai footballers 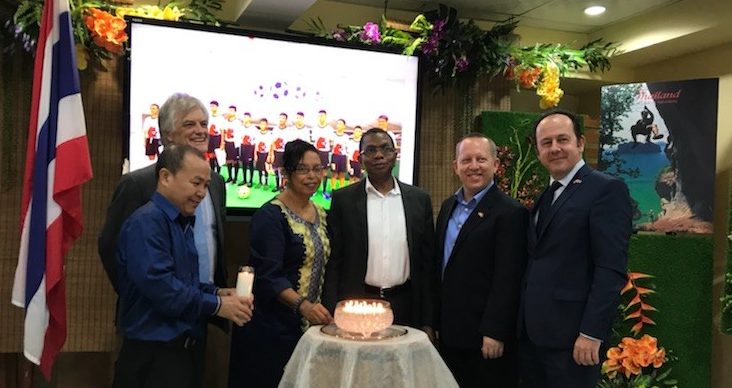 Chargé d’Affaires John McIntyre (second from right) with other diplomats at the Thanksgiving Service.

A thanksgiving service was held on Sunday at the residence of the honorary Thai Consul in Port of Spain for the successful rescue of the soccer team from Tham Luang Nang Non Cave complex in Northern Thailand.  The U.S. was among countries recognized for its role in the rescue of the 12 boys and their coach last month.

Chargé d’Affaires John McIntyre in brief remarks at the event noted the search and rescue unfolded like a Hollywood block buster movie.

Chargé McIntyre said, “the U.S. Government and U.S. private sector proudly supported the Thai-led multinational operation.  Service members from the Indo-Pacific Command, officers and staff of the U.S. Mission to Thailand, and representatives of U.S. companies joined hands with their Thai and international partners to help achieve this singular success.  We will always remember the heroism and sacrifice of former Navy Seal Saman Kuman.

“As American actor John Wayne once said, “Courage is being scared to death and saddling up anyway.”  Surviving in a dark cave for ten days and then finding the courage to swim out must have been something like that.  For the rescuers, swimming into twisted, tiny spaces, especially after the loss of their colleague, must have been a fearsome experience.

“Thank goodness for this terrific outcome, we are thankful, we are truly thankful.”