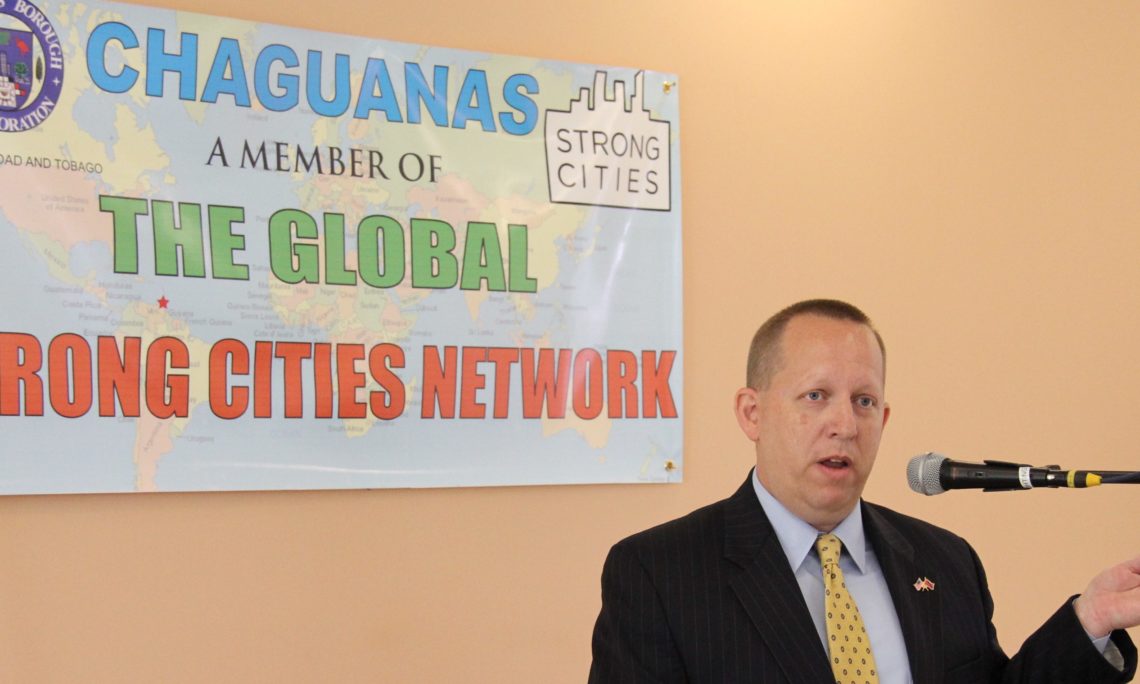 Members of the media and specially invited guests…

I’m really pleased to be here today, and not only because Mayor Boodhan just served us the best roti that I’ve had in some time.

I’m really pleased that Chaguanas has joined the Strong Cities Network, the first global network of mayors, municipal-level policy makers, and practitioners united in building social cohesion and community resilience to counter violent extremism in all its forms.

This is a big deal, and the Mayor and his team deserves a round of applause.

But this event also means a lot to me, because it demonstrates several things that make me feel that, as chief of mission of the U.S. Embassy in Trinidad and Tobago, I’ve got one of the best jobs of any U.S. diplomat anywhere in the world.

Security is a big priority for us.  We see how crime, violent extremism, guns, drugs, and trafficking in persons hurt our countries.  And we are working together to address these challenges.  Because, let’s face it, our countries are so close culturally, geographically, in terms of family relationships, commerce and travel, that we’re more than just neighbors, we’re family.

Secondly, we have great partners here in Government, the Private Sector, and Civil Society.

Like the Mayor and his colleagues.  This specific initiative came out of a meeting with Mayor Boodhan and a group of officials from the U.S. State Department.  Our Officials were hoping they might be able to interest Mayor Boodhan in eventually joining the Strong Cities Network.  They prepared a long argument why he should join, how Chaguanas could not only benefit, but also contribute, to the network.  Before the first official could even finish his pitch, the Mayor asked:

“How many cities are in the Strong Cities Network.”

Like a good diplomat, the official was prepared with the answer.  He said 85.

Our officials were a bit disappointed, because they thought it was going to be a hard sell.  Because that’s the way things usually are.

But it wasn’t a hard sell.  It was an easy one, because Mayor Boodhan shared our vision already.  We didn’t have to convince him.

We have many great partners in Trinidad and Tobago, and we are proud to count Mayor Boodhan among them.

Finally, this event demonstrates how the U.S. Embassy works together on important issues.  This initiative involved several different Embassy offices, and the Mayor had many of us here for roti already.  Some of us were even in Chaguanas carnival, which I heard was a lot of fun.

We are always talking about a whole-of-government approach, but in practice, it’s not always easy to break down the silos and work across offices and agencies, building a team that can bring different resources and perspectives together to address complex issues.  But that’s what we have here at the U.S. Embassy, with the Political Section, the Public Affairs Section, the Military and Law Enforcement, all working together as a team.

That’s also what I see here in Chaguanas.

Because we can’t do this alone.

Mayor Boodhan understands this.  That’s why he convenes a regular task force on security that includes municipal leaders, government agencies like police and fire services, the Chamber of Commerce, the inter-faith community, private security firms, and other stakeholders.

We hope he’ll bring this best practice to the Strong Cities Network.

Here’s another one:  When the U.S. officials were here, they noticed that the Mayor’s office had separate calendars printed out celebrating each major religion here in Chaguanas—Christian, Hindu, and Muslim.

One of the officials said this was a best practice for interfaith understanding.  But for people in Chaguanas, you might not see it as something out of the ordinary, because recognizing the different faiths is second nature to you.

Well, not for other places in the world…

There are a lot of great things going on in Chaguanas.  I have been here a few times recently to speak at the brand new campus of COSTAAT just down the road.

And, of course, you have a Chuckie Cheese…

So thank you Mr. Mayor for inviting us to your great city…

Congratulations on the membership of Chaguanas to the Strong Cities Network.

And remember that the U.S. Embassy and the government we represent will continue to work together with you on issues of shared concern.

As a partner and a friend.