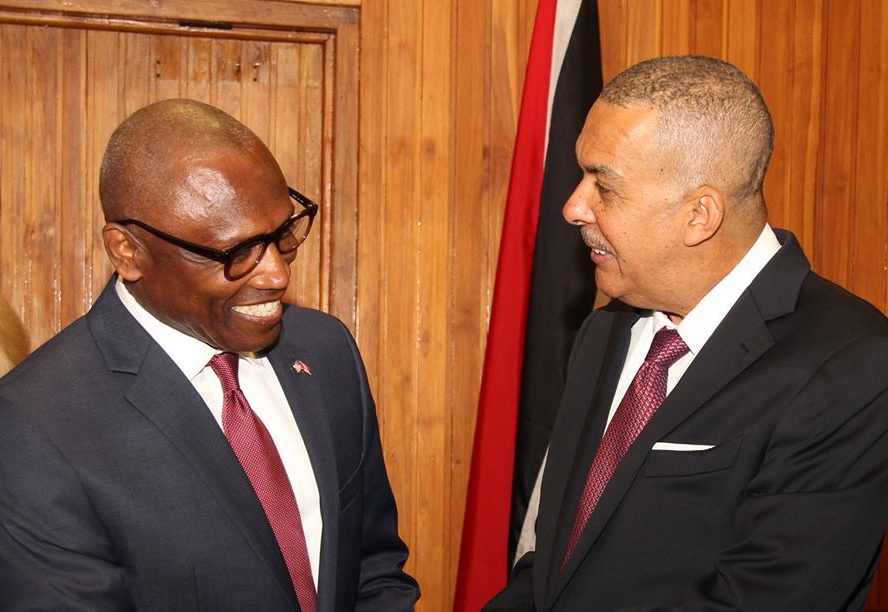 His Excellency Anthony Thomas Aquinas Carmona, President and Commander-in-Chief of the Armed Forces of the Republic of Trinidad and Tobago…

Her Excellency Reema Carmona, First Lady of the Republic of Trinidad and Tobago…

Ms. Margaret B. Diop, Deputy Chief of Mission, Embassy of the United States of America…

My lovely wife, Dr. Cote Estrada and my Aunt, Ms. Sheila Andrews, both of whom I am very pleased to have here with me today…

Members of the Media.

I am thrilled to be here in this beautiful country of Trinidad and Tobago!
As a young child I lived in Laventille, Diego Martin, and Toco.

I have fond memories of watching sea turtles on the beach in Toco, pitching marbles, flying kites, and playing football in Laventille and Diego Martin.

At 14 years of age I moved to the United States.

I also have many fond memories of my adolescence there, especially the moment when I became a United States citizen.

I joined the Marine Corps, which is a branch of the U.S. military, where I worked hard and rose to be our nation’s highest enlisted Marine—the 15th Sergeant Major of the Marine Corps.

After thirty-four years in the Marines, I continued to serve my country in government and the private sector.

Now I’m here, Ambassador of the United States of America to the Republic of Trinidad and Tobago.

Looking at you, I see myself when I was your age.  I think of how lucky I was to be given the opportunity to succeed.

I want you to have opportunities to succeed.

I learned leadership in the Marine Corps.  Where every Marine is considered a leader.

I believe that’s true not just in the Marines.  It’s true here today.  Everyone of you here in this room is a leader. You can set an example for others.

Leaders lead by example. You can make good decisions. You can show moral courage, compassion, and respect for everyone around you. When others are ready to quit or do the wrong thing, you can inspire them not to quit and to do the right thing.

When you leave here today, I want you to remember one thing:

Everyone can be a leader.

So–Who can be a leader?

When people ask me what makes the United States so great, I say it’s the people and commitment to diversity and inclusion, appreciating that everyone no matter where they come from, what they look like, the color of their skin or their religion, ethnicity, whether they have a disability… Everyone has a right to be respected and included.

The fact that an immigrant from Trinidad and Tobago was given the opportunity to become the Sergeant Major of the Marine Corps, an institution that is older than our nation…

Or that an African-American can become President…

How did President Obama get to where he is today?

It was his commitment to education.

Education is the foundation of opportunities for you as individuals.  And for your nation to prosper economically and remain free.

I encourage each of you to work hard at school…

I challenge each of you to step up and be a leader.

Do the right thing…especially if it’s not popular , especially when no one is looking.

Do it here in Trinidad and Tobago.

Thank you and God Bless…