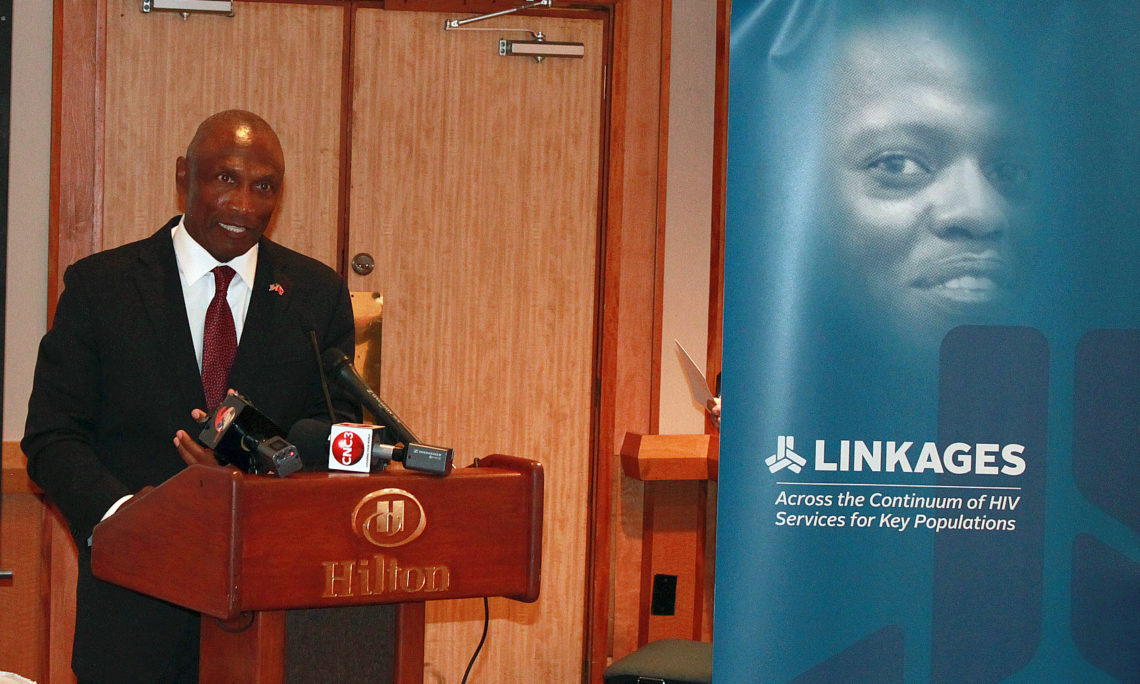 A new project, the first and largest of its kind, is working to reduce the spread of HIV and improve health care for key populations most at risk of and already living with HIV in select Caribbean countries.

The LINKAGES Project (Linkages across the Continuum of HIV Services for Key Populations Affected by HIV), which is funded by the United States Agency for International Development (USAID) and the United States President’s Emergency Plan for AIDS Relief (PEPFAR) focuses on at-risk populations in the Bahamas, Barbados, Trinidad and Tobago and Suriname.

“LINKAGES is about passion, partnership and re-thinking the way we address HIV, with the end goal that all members of key populations in the Caribbean and globally will have access to comprehensive health care services and enjoy a high quality of life,” explained Hally Mahler, LINKAGES Director, Washington D.C. “LINKAGES is excited to work alongside local governments, international partners and local communities in these efforts.”

LINKAGES partners with governments, communities and key populations in an effort to provide support and reduce HIV-related stigma and discrimination.

“It is important to focus on key populations in the fight against HIV and we must not just do so in rhetoric.  Inclusion of men who have sex with men, sex workers and transgender women must be done in ways that address their experiences and help heal their communities.  This is the opportunity we have with the LINKAGES project,” said Luke Sinnette, Director of Friends for Life, a Trinidad-based LINKAGES grantee.

Through funding and technical support, LINKAGES will share the best tools and strategies drawn from decades of global experience and adapted to local needs and conditions.  This will help LINKAGES and its partner countries realize challenging but essential objectives: testing those who don’t know their HIV status; linking those living with HIV to quality care, treatment and support; and reducing new infections.  The program will also address incidents of stigma and violence that place people at greater risk for HIV.

“USAID, as part of the broader PEPFAR initiative in Trinidad and the Caribbean, is proud to work hand-in-hand with Governments, Civil Society and the LINKAGES project to pilot innovative ways to expand access to life-saving HIV/AIDS services to critically underserved and stigmatized populations.  We know that sustained progress towards achieving an AIDS-Free Caribbean demands this focus and we applaud national and regional leaders, such as those here in Trinidad, for their tireless dedication to this health and human rights agenda,” said Christopher Cushing, Mission Director, USAID Eastern and Southern Caribbean.

To honor this ambitious plan and to celebrate a new era in HIV programs, LINKAGES was launched in Trinidad and Tobago on December 12, 2016 in collaboration with the Office of the Prime Minister, Ministry of Health, and the Family Planning Association of Trinidad and Tobago.  The U.S. Ambassador to Trinidad and Tobago John L. Estrada, USAID Eastern and Southern Caribbean Mission Director Christopher Cushing, the LINKAGES Project Director Hally Mahler, and leaders of local community organizations were among those invited to participate in the half day event.

LINKAGES, a five-year cooperative agreement funded by PEPFAR and USAID, is the largest global project dedicated to key populations. The project is led by FHI 360 in partnership with IntraHealth International, Pact, and the University of North Carolina at Chapel Hill.

More information on LINKAGES can be found at www.fhi360.org/LINKAGES.