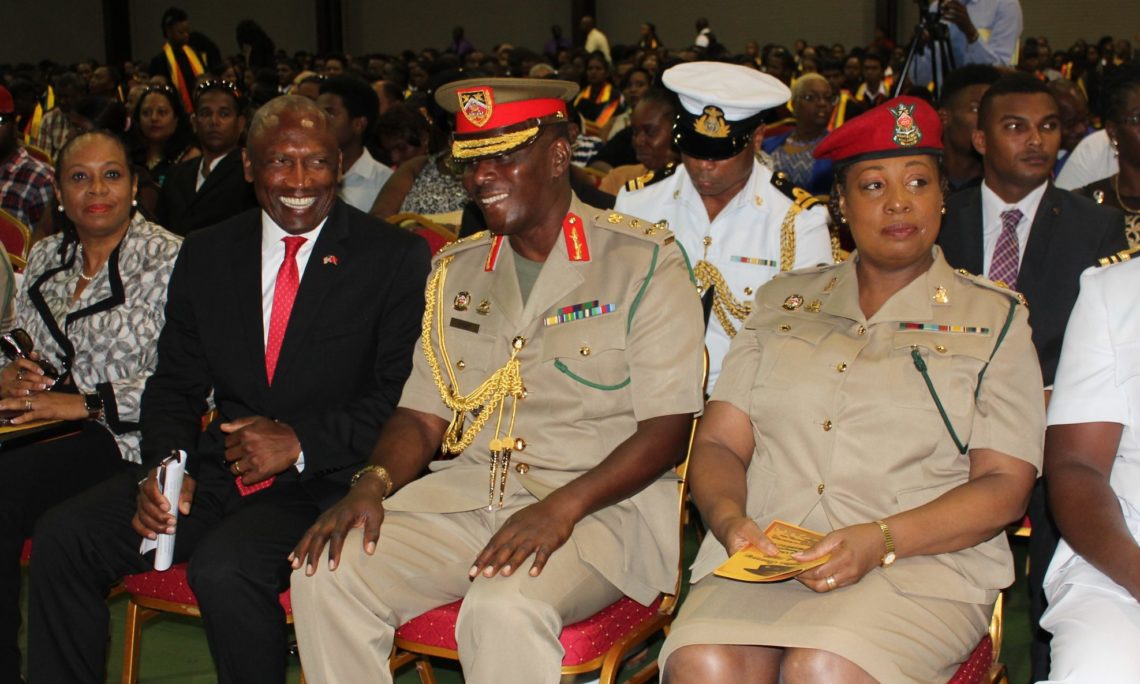 Allow me to begin my remarks this morning by thanking general smart for allowing me the opportunity to attend your graduation and to commend your government for its commitment to its citizens which is demonstrated in this program.

When I first heard about the Civilian Conservation Corps a few months ago, I Immediately knew I wanted to be part of what I consider to be one of the most important social programs in this country.  I am told that the Civilian Conversation Corps has a simple belief…..and that is “all young people can have a worthwhile future”.  Ladies and gentlemen, let me say that I have lived my entire adult life believing that.  As I rose to the highest enlisted rank in the United States Marine Corps, I crossed paths with many young people that shared some of the same struggles you do, but who like you, were determined to change the course of their future.

As I look at the young men and women here, I see the faces of determination, of hope, of courage and more importantly of the future of this country.  Many of you already know my story.  I was born in Laventille, went to the United States, and eventually joined the marines. Some of you may think that I don’t know how difficult you have it because I left Trinidad, but let me assure you, although the location may have changed, the hurdles in front of me were also very challenging.  Experience has taught me the value of hard work and perseverance and the one thing I believe is constant, regardless of where you are, is the importance of an education and the self determination of an individual to make a difference.  It is up to you to be that positive role model others aspire to become, or to choose a path that makes you yet another statistic.

Coming back to Trinidad and Tobago after many years has given me the opportunity to see all the changes that have taken place, and they have not all been positive or progressive.  This country is a beautiful and developed nation, but unfortunately many of the positive things that are taking place are being overshadowed by the current environment.   Your government is working hard every day to improve the safety and security of its citizens but it cannot do it alone….it needs you…every citizen has a responsibility to do their part.  This is not a government problem, but rather a national responsibility.

I encourage each of you sitting here today to be a champion of change, be a positive voice in your communities the government cannot fix problems alone…be part of the solution.  Take the skills this program has taught you and do your part to contribute to your communities, your families, and your country. I know you can do this because many before you who graduated from this program have done it.  People like Nelva Miller who is now a qualified nurse, Ecklett Sandy-Burnett, a system analyst at the Ministry of National Security, Daeynel Armstrong who became a police officer or Filvon Glasgow, a lieutenant in the Defense Force.  The sacrifices you have made that brought you here today are proof that you can make a difference.

I extend to you my sincerest congratulations and I feel so very privileged to share this day with you.  I also want to commend the Trinidad and Tobago Defense Force for the tremendous job as the executors of this program on behalf of the government,  and I encourage Prime Minister Rowley to continue to invest in the Civilian Conservation Corps because it is truly an investment in you.

Congratulations again to all of you.