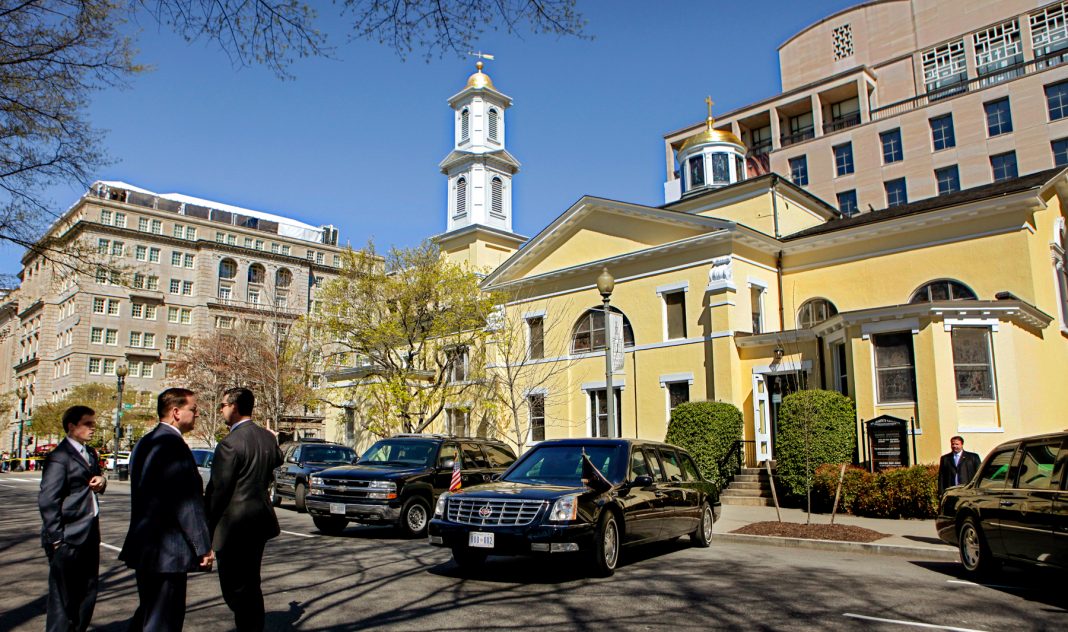 President Obama's motorcade outside St. John's Church on Easter in 2009. Every president since James Madison has attended services at the Lafayette Square landmark. (© AP Images)
By Christopher Connell –

The U.S. Constitution guarantees freedom of religion and prohibits the establishment of any national religion. But separation of church and state doesn’t preclude national leaders’ praying in public.

One of the most venerated traditions is for newly elected presidents to attend services at St. John’s Episcopal Church, the stately yellow edifice with a gold weather vane across Lafayette Park from the White House.

Every chief executive since James Madison, the fourth president, has attended at least one service there, and President-elect Donald Trump will uphold the custom that Franklin D. Roosevelt began in 1933 by attending a service on the morning of Inauguration Day.

Customarily, the vice president–elect and Cabinet nominees and their spouses attend too. The Trumps will be seated in Pew 54, which is reserved for the president and marked with a plaque. It is not the first row, but eight back.

The church, designed by Benjamin Latrobe, the architect of the Capitol, opened in 1816, the penultimate year of Madison’s presidency.

Convenience may have been one reason the church, a National Historic Landmark, earned its nickname, but President George H.W. Bush and a number of other presidents worshiped regularly at St. John’s over two centuries.

Abraham Lincoln would slip into the church to pray in solitude during the Civil War, according to Richard Grimmett’s St. John’s Church, Lafayette Square: The History and Heritage of the Church of the Presidents. Lyndon Johnson went to a memorial service he requested be held the day after John Kennedy’s assassination in November 1963.

Latrobe designed St. John’s in the shape of a Greek cross with a circular ceiling and a small cupola. That part is preserved, but Latrobe’s design was soon altered with the addition of a nave, colonnade and bell tower.

Now surrounded by office buildings, the yellow, stuccoed church stands out with its columns and the steeple that gives it a New England look. Only 2.8-hectare Lafayette Park and Pennsylvania Avenue separate it from the White House lawn. The Washington Monument hovers behind the executive mansion.