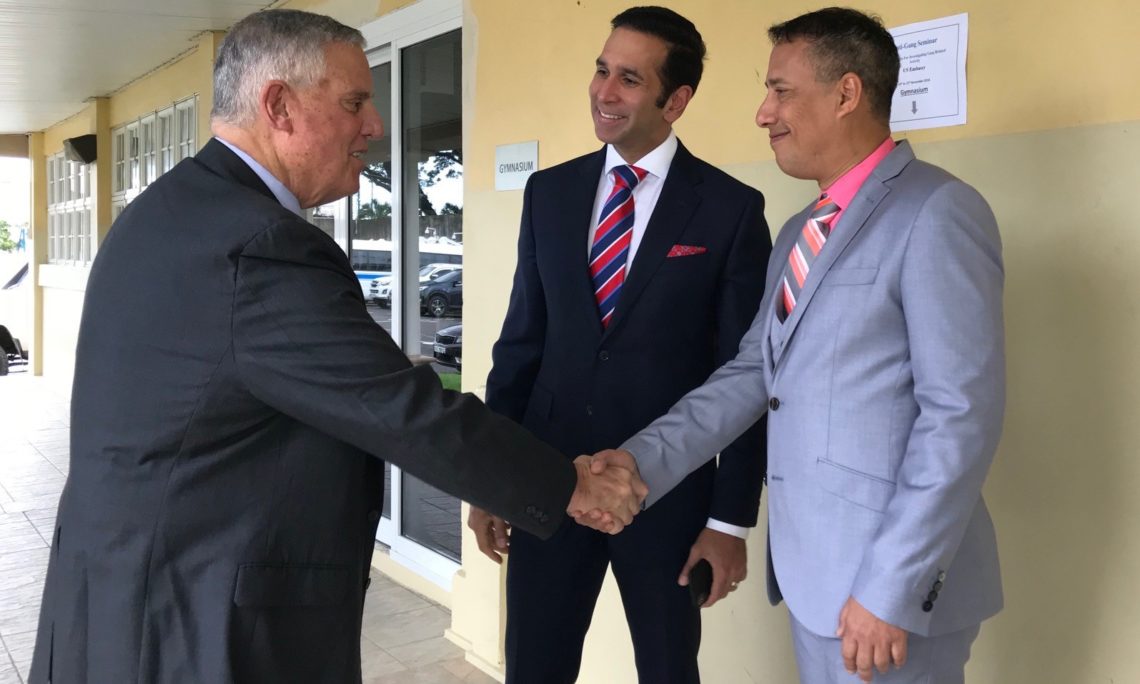 The Honorable Gillian Lucky, Justice of the High Court of the Republic of Trinidad and Tobago;

Other Representatives of the Trinidad and Tobago Police Service Academy;

Workshop Participants from the Trinidad and Tobago Police Service;

I am delighted to be here today, nearly one month to the day after arriving as the new U.S. Ambassador to the Republic of Trinidad and Tobago.

I view your presence—and I hope everyone here today sees it this way—as a sign of the commitment of the Government of Trinidad and Tobago, at its most senior levels, to tackle the gang and crime problem facing the country.

I also want to thank Justice Lucky for taking time out of her busy schedule to lead this important workshop over the next two days.

Thank you as well to the leadership and staff of the Police Academy for your support in putting this workshop together.

Finally, thank you to the workshop participants.

I’m glad to see so many of you here this morning.

Everyone in this room recognizes the need to confront the gang and violence problem in Trinidad and Tobago.

Your government recognizes this, and passed the Anti-Gang Bill—unanimously I might add—earlier this year to enhance your ability to investigate criminal gangs.

The government and your fellow citizens are now looking to you to use the law to bring to justice the gang members who are responsible for much of the murder, drug trafficking and other criminal activity plaguing the nation.

I think you know already this is not going to be easy. It will require intelligence, perseverance and even personal courage,  but I know all of you are up to the task.

As I said to the media recently, this is not a problem unique to Trinidad and Tobago.

Many places in the United States, including my hometown of New York, have had difficulties dealing with gangs over the years.

In New York murders peaked in 1990 when they were 2,245 killings. In 2017 there were just 219 homicides, the lowest since the 1950s. So please know, things can change, you can make a difference and you are not alone.  The United States stands with you, ready to assist where we can to confront the gang problem    and to strengthen the safety and security of all citizens of Trinidad and Tobago.

In the past few months, we offered training and equipment to help you go after the gang networks operating in the country.

We donated computer servers to the Organized Crime and Intelligence Unit, to aid your analysis of gangs operating in Trinidad and Tobago.

We provided new canines to the TTPS, the Prison Service, and the Customs and Excise Division to get the drugs and firearms off the street, and to keep drugs and cellphones outside prison cells.

We trained judges on the latest legal trends with respect to digital evidence, so they know how to properly assist and admit the critical evidence you will bring as evidence of gang membership and criminal activity.

As a follow-on to today’s workshop, later in 2019 we will ask Commissioner Griffith to nominate officers to attend a separate Anti-Gang Investigations training at our law enforcement academy in El Salvador.

U.S. support for all of these initiatives is reflective of our commitment to Trinidad and Tobago under the Caribbean Basin Security Initiative, also known as CBSI, and the Caribbean 2020 Initiative.

Our security partnership with the TTPS and other agencies under CBSI is unwavering.  The message to take from my comments is that the United States is committed to joining this fight against crime with you, as a trusted partner and friend, for the safety of citizens both here and in the United States.

I wish all participants a good workshop.